A Camera for the People 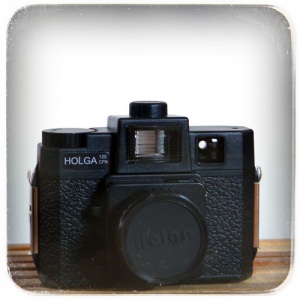 Last August, I picked up a Holga 120S camera on a day of garage sale cruising by bicycle. It cost me the grand sum of  50 cents. The guy a bought it from said it had very few light leaks, but he hadn’t used it in a while. I couldn’t believe my luck – I was delighted!

I first became aware of toy cameras when I met my photographer boyfriend, Mat Henley, back in the summer of 2008. Not long after that, I noticed that local small business owner and photographer Ken Gordon has made his tiny café, street level espresso, a shrine to toy cameras – he even has cameras, accessories and books for sale in the tiny 400 square foot space. Ken teaches workshops on photography and was recently behind an exhibit showcasing local toy camera photography at Luz gallery. While waiting for ken to make my Americano one afternoon, I overheard a woman telling him that an elementary school aged friend of hers had submitted her photos. I really perked up when I heard that kids were producing art with these cheap, plastic cameras!

Now, I realize the Holga and toy cameras in general may seem an unlikely subject for TFP. After all, these plastic cameras are manufactured in China on an assembly line from the cheapest materials available. Still, I hope you will hear me out when I explain why I think Holgas are fantastic and liberating and do belong here.

First of all, there are lots of toy cameras already out there in the world. I found mine at a garage sale. Try ebay, craigslist, photography forums, or put a wanted posting out there. There were billions of these cameras churned out in the 80’s and 90’s. You can buy them new, but I prefer cameras with a past, a history. I like rescuing used and discarded objects and I love them like orphans. So, okay, they aren’t made of cardboard or moss or biodegradable materials (but wouldn’t recycled plastic be awesome?), and they aren’t built to last forever. There are, however, very few parts to this simple little camera, which makes them difficult to break. The casing is the most likely to crack, but you can just tape it up again with duct tape (or painters tape, as I did), which also prevents light leaks, and away you go. Cheapest repair ever. No need to hand it over to an “expert.”

The Holga is the camera for the people. And this brings me back to the toy camera exhibit held at Luz back in December (which I missed, incidentally, and I hope there will be another!). The exhibit, called Low Fidelity, promised to be “an exciting showcase of fine creative photography made with ‘crappy cameras'” The event embraced the playful, creative and unreliable nature of toy and pinhole photography, which can make incredible images “without relying on technology.” (This is debatable, depending on your definition of technology, but, after the pinhole camera, they are as low-tech as photography gets.) Since art and photography exhibits have so long been dominated by professionals with incredibly expensive equipment, I loved the idea of a toy camera exhibit. Art should not be reserved only for those who can afford it. Bravo to everyone involved in this exhibit!

I missed the show and I didn’t get around to loading my Holga with film until last weekend. I picked up some black & white 120 medium format film for about $6 and some really nice colour film for $12. The camera is designed for medium format film, but you can use 35mm film to produce some really neat effects. You can bring the film into a lab to be processed, or in keeping with the DIY spirit of the Holga, you can process it yourself (is there anything the Internet can’t teach you?). I took it to the lab to be processed and digitized this time around, but next time I will develop the black & white film myself. We have a 35mm negative scanner, but it wont work for medium format film, and I don’t intend to invest in expensive equipment at the moment. I do have a simple, inexpensive flatbed scanner, and I learned from GoHolga that you can scan the processed negatives this way and make them positive using imagine editing software (like Photoshop). You mean I could do this from a cabin in the middle of the woods (with solar power)? Yes. Yes, yes, and yes.

The beauty of film photography in general is that because the number of shots you have is limited (and film is expensive) you really spend time thinking about each shot. Part of the beauty of the Holga is that there few components; mine has only three focus settings and beyond that you only control how far you advance the film. So, my little Holga strikes the perfect balance of meditation and spontaneity. It’s playful – it’s a TOY! But it’s a toy that makes beautiful art.

People laugh when you take out your plastic camera covered in green painter’s tape. I think every single portrait I’ve taken features people laughing and pointing at me. I asked three actors in costume if they would please step into the light so I could take their picture and I think they actually thought I was taking an imaginary picture with my toy! It’s delightful, and a great way to put subjects at ease and play around.

I pick up my film and digital scans tomorrow, and I promise to share the best results here on TFP blog. In the meantime, I will share with you some excellent resources that can tell you everything you need to know to start playing and creating with toy cameras.

Holga group on Flickr – see what other people are making

The Holga on Lomography – Did you think your eyes were open? Learn more about the history of the Holga and techniques, find resources and buy toy cameras and accessories here.

Anthony Maddaloni taught me how to load my Holga with film – thank you!

Have you had a good experience with a toy camera? Do you have any photos to share? Please tell us! Include links to your work or cool resources in a comment.

4 responses to “A Camera for the People”